My favourite word is ‘muffled’, my favourite idiom ‘as cool as a cucumber’ and I don’t have a favourite tense in English, although I do in French. Or at least I did, until I found out that the subjunctive is a mood and not a tense.

Perhaps one of the more interesting features of English, and one which seems to be much more prevalent than in most other languages, is the existence of portmanteaus.

Do your students ever speak Spanglish? Do you know any Shopaholics? Chocoholics? Workaholics? What’s your perfect brunch?  Ever stayed in a motel? Seen a Bollywood film?  All portmanteaus.

The term portmanteau was first used by Humpty Dumpty in Lewis Carroll’s Through the Looking Glass:

“Well, ‘slithy’ means “lithe and slimy” and ‘mimsy’ is “flimsy and miserable”. You see it’s like a portmanteau—there are two meanings packed up into one word.”

Portmanteau is a French term for a suitcase, itself made up of two words: porter (to carry) and manteau (coat), hence two meanings ‘packed up’ in one word.

Portmanteaus aren’t the same as compound words, as the former are blended (they lose some of their letters), whereas the latter are joined (and generally don’t).

There are new portmanteaus being coined all the time. More and more people are 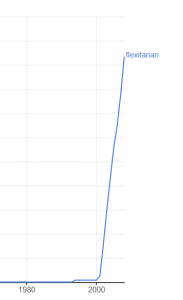 turning vegetarian, though there are also many flexitarians – flexible vegetarians, those who eat meat occasionally. I’d thought this was quite a new term, though according to google’s ngram viewer ‘flexitarian’ actually entered use in 1993, but really took off in 2001.

Ngram viewer goes up to 2008, not long enough to chart the rise of the phablet (a large phone, not quite as big as a tablet) which entered usage in 2010.

Some portmanteaus lead to spin offs. ‘Brexit’ (Britain+exit) led to some sectors of French politics calling for a ‘Frexit’, though these voices seem to have quietened down recently in light of the ‘complicated’ nature of proceedings.

If you’re really famous, you might even get a portmanteau made out of your name: such as Brangelina (Brad Pitt + Angelina Jolie).

Have a look at these portmanteaus. Which two words are they made up of? What do they mean?

How many do you know?

Here are your answers:

So, do you need to start teaching your students these portmanteaus? Well, they’re not mentioned in the CEFR and they probably won’t help your students pass a certification exam. But they are an interesting language point and might form the basis of a light hearted lesson.

Present some in context. Students work out the words they’re made of and what they mean.

Give just the words. Students work out the words they’re made of and try to use them in context.

Look at portmanteaus in a certain field. In technology alone you can find email, emoticon, phablet, vlog, digimon etc.

Give students access to a list. They choose their five favourites and teach them in the next class.

Students write a silly short story. How many can they use in 100 words? I managed twelve, can you or your students beat that?

One morning, I was filming a vlog on my phablet about a fatberg in the local sewer when the doorbell rang. It was a genetically modified food salesman! I don’t normally eat frankenfood and I’m a flexitarian too, but I bought some tomatoes from the Spanglish-speaking seller. I went into the kitchen later and the tomatoes had kept growing! I’d guesstimate they weighed 10kg each! So I invited my friends round for a brunch of tomatoes and frappuccino, then our tummies hurt, so we chillaxed in the lounge playing digimon on the console: which lead to a bad case of nintendinitis the next day.

Pairs of students invent their own portmanteaus. They present their word to the class, explaining the words it’s made from (or eliciting them) and giving an example. The class votes on the funniest / the most useful / which word should enter the English language.

10 weather expressions and ways to use them in class

10 ways to talk about happiness, positivity and laughter

10 expressions (with talk) to get your students talking