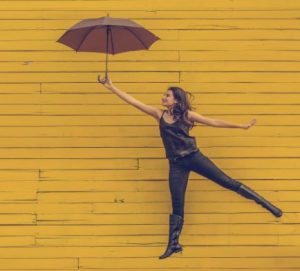 Welcome back everybody! With the end of Christmas, New Year and Epiphany it’s time to tighten our belts financially, loosen our belts literally (at least in my case after all the mince pies) and generally get back to work.  But do not despair! This blog post has the aim of staving off the holiday blues with 10 ways to talk about happiness, positivity and laughter in English plus ideas to teach and use these expressions in class.

Spring may seem a long way off after the weekend’s snowfall, but here is a nice expression to talk about someone who seems positive, energetic and enthusiastic.

Chris is full of the joys of spring at the moment. Things must be going well with his new girlfriend!

A homograph of spring in an expression which has a very similar meaning to number 1, though I think there is more emphasis placed on someone’s energy here.

Since winning the ‘Most improved player’ award Jane has had a real spring in her step.

An expression used to describe someone who seems cheerful and carefree: someone who doesn’t seem to get fazed when things go wrong.

Frank says if he loses his job he’ll just have to get another one – he’s a happy-go-lucky kind of guy and doesn’t seem too bothered!

A commonly used idiom to describe someone’s happiness at something that has happened.

Sarah and Tom got engaged last week and they’re both over the moon!

You all enjoyed that homework assignment I set you over the holiday and have done extra research into the topic? That’s music to my ears! (NB, may not be representative of reality).

To be laughing uncontrollably.

We were in fits of laughter on New Year’s Eve when mum tried to cram 12 large grapes into her mouth at once and they started falling out (this one’s real: see photographic evidence). 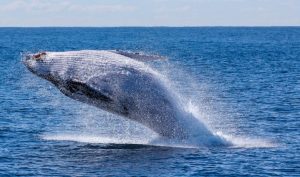 To be having a lot of fun, to be enjoying yourself immensely.

Fran is normally quite reserved but at the party he was laughing, dancing, drinking until the early hours: he had an absolute whale of a time!

Another idiom which means ‘very happy’, emphasizing the broadness of the smile on someone’s face.

Matthew’s grinning from ear to ear. He worked hard and passed all his exams, he’s normally very modest, but can’t hide his happiness this time! 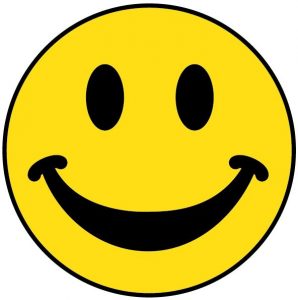 Lots of more expressive ways of saying ‘very happy’. The possibilities are almost endless! ‘Chuffed’ is informal and not used in American English.

He got the job? I’m chuffed to bits for him, he really deserves it! 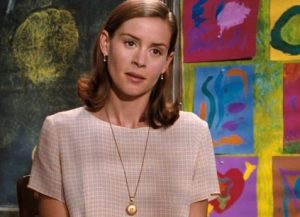 Let’s end on this one for the New Year. The expression refers to something that is new, different, fresh and generally seems more interesting or exciting.

The pupils were used to copying from the board and learning by heart with The Trunchbull, but Miss Honey has changed all that, she’s a breath of fresh air! (anyone else like Matilda?!)

Using these expressions in class

Match up definitions with expressions / remove expressions from examples and have students put them back in (some could have more than one possible answer).

Match up expressions with pictures.

Play memory game with expressions and their pictures.

Forced output: put the expressions on cards and students in small groups (3-4). Students talk about their Christmas holidays and try to use the expressions on the cards. When they use one, they pick up the card. The student with the most cards at the end wins.

Forced output 2: same as above, but with the pictures (harder, students have to recall the expressions).

Play charades in pairs / small groups: students act out the expressions to elicit them from their classmates (we can add a competitive element here).

Students research the opposites of these expressions (or as close as they can find to opposites) and share them with their classmates.

In groups of four, students try to come up with four open questions, each one containing one of the target expressions. They swap their questions with other groups to ask and answer (having students come up with questions to ask each other can be more motivational than having everything imposed by the teacher).

10 expressions (with talk) to get your students talking

10 weather expressions and ways to use them in class

50 of the most useful English abbreviations and acronyms