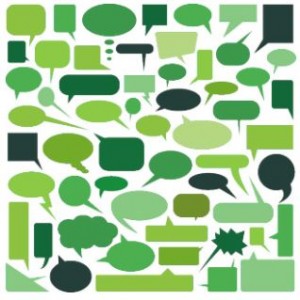 Stuck for something to talk about in class?  Well here are ten useful expressions in English to stretch your students’ vocabulary plus a quick activity to get them chatting as well.

Teach the expressions anyway you see fit.  You might start out by putting the word “talk” on the board and ask students to think of different ways of talking, or as many expressions with “talk” as they know.  You can then include the expressions you want them to learn and have them guess at the meaning and use a dictionary to check, or have them match expressions to their meanings.

Here are my ten (but you can use others if you like):

To make small talk:  Often a way of breaking the ice or getting a conversation started, making small talk means to speak about trivial or unimportant things.  So if you found yourself speaking to someone you didn’t know you might make small talk until you found something in common.

To talk turkey:  Nothing to do with turkeys, this expression means to speak in a frank and businesslike manner, the exact opposite of making small talk.  Example:  “Well enough of this small talk.  Let’s talk turkey.  What price are you asking for this product of yours and when can I expect the delivery?”

To talk shop:  Talking shop is speaking about the details, procedures and day-to-day goings on of your job or business, but often outside of work hours and in a way other people find boring.  So at dinner your partner or significant other might ask you to “stop talking shop” to get your mind off of work and focus on them for a change!

To talk someone into (doing) something: to persuade.  So, you might talk your friend into going to see a film that they weren’t really interested in at first.

To talk someone out of (doing) something: to dissuade.  The exact opposite of the previous expression.  Example:  “I talked John out of buying that pink sport coat.  It really didn’t suit him.”

To talk tough: This can either mean to speak in an intimidating way (He talks tough, but his bark is worse than his bite) or to state a strong position or opinions (The governor talks tough on crime).

To talk a mile a minute: To speak quickly and incessantly.  Not often something most of us find attractive in other people!

To talk until you’re blue in the face: This might happen in an unsuccessful effort to persuade a stubborn person.  “I talked to Steve about not leaving his job until he had another one lined up until I was blue in the face, but in the end he decided not to take my advice and left anyway.”

To talk trash: Often done by opponents before a competition or sporting event, this entails the hurling of taunts and insults in an attempt to intimidate the other side.  “In the lead up to the fight the two boxers engaged in a lot of trash talk.”

To talk dirty:  Usually negative this means using sexually explicit language in an offensive manner, but it can also mean to use the same kind of language to arouse someone sexually!

Once your students have learned the vocabulary, or in the next class to review it, have them draw a number of shapes (triangles, circles, squares, etc) randomly on a piece of paper.  Seven is a good number to go with.  Then ask them to write the answer to questions you ask them in the shapes (and again randomly, not in order).  The questions should use the vocabulary in some way.  Here are three examples:

Then have the students speak about their answers in pairs or small groups, and ask follow-up questions.  Hopefully they will be remembering and using the expressions as they do this.