Integrating pronunciation into your classes 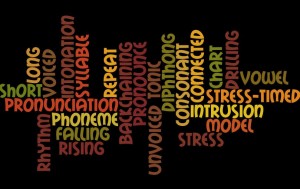 At its most basic level pronunciation deals with the production of individual sounds or phonemes.  For many students and beginning teachers this is what comes to mind when they think of pronunciation.

The approach of learning and practicing phonemes in isolation and then using them as building blocks to construct words or longer utterances is atomistic in nature, and suffers from obvious limitations which I will touch on below, but it also has its positive points, and chief among these is something I referred to in part 1 of this series: it gets students (and teachers) to listen to and feel what is going on with their bodies when they are producing sounds.

Here are some things to think about when teaching pronunciation in this way:

Learn your way around the phonemic chart

This can be daunting for many teachers just getting started and they may feel a great deal of pressure if they are working in a school or academy where the chart has been placed at the front of the class and they are expected to use it.  So let me start with a little confession of my own: I have never been a consistent user of the chart, but tended to use it, as I said in part 1, more “opportunistically.”

I have worked with many colleagues who knew the sounds back and forth and were so fluent with the script that they could effortlessly write phonemic transcriptions of words and phrases on the whiteboard.  In many cases their students even became fairly adept at this.  I can certainly see the benefits.  Imagine how these students could self-access the pronunciation information in a dictionary, for example!

But when speaking of the chart we also have to be aware of the fact that there is more than one version out there and that none of them can accommodate all types of native speaker pronunciations.  As a North American speaker of English most of the charts I have worked with can lead to some confusion for me.  An Irish friend of mine once commented on how one textbook identified the boldfaced vowel sound in the following phrase to be the same:

I caught the ball on the tennis court. /ɔː/

For both of us these were three distinct sounds.

And these individual sounds are only useful up to a point.  In isolation they are fine, but once you put them together and in longer stretches of language they often change, so a building block approach based on phonemes alone has obvious limits.

What I really find valuable about the chart

But these limitations aside I personally find the chart useful in terms of how it informs basic rules around the production of sounds in the English language.  In other words, it has taught me as a teacher a lot about how us English speakers pronounce things and this is information I can pass on to my students.  Here are some examples:

One of the first things we learn to do as teachers is to mark word stress.  It’s also a good time to point out the non-stressed schwa (/ə/) sound which is the most common (and frankly boring) sound in English.  In fact the sound is almost so non-descript that it is as though the mouth is doing nothing when it’s being pronounced, or at least making the minimal effort.  But this too is important to point out to learners.  There is a laziness to the pronunciation of English, a real path of least resistance attitude that native speakers use, and the schwa is at the root of this.

Phonemes across a continuum

Vowels can often be related as subtle variations along a continuum.  So long /iː/ (think “tea”), short /ɪ/ (think “tip”) and /e/ (think shed) can be practiced together to help students notice subtle differences.   Try them out and see how when you pronounce “tea” the chin is quite high and your lips tend to form a rather tight smile.  The chin drops and the face loosens a bit for “tip” and then much more so for “shed.”

If you’re teaching in a Spanish speaking country as I have this is a very useful group of phonemes to practice together.  Both the /iː/ and the /e/ have equivalent sounds in Spanish, but the /ɪ/ is more difficult for Spanish speakers to replicate.  By seeing it as a sound roughly between two more familiar sounds it becomes somewhat easier to replicate.  Once again, note how where you work will change how you teach pronunciation considerably.  Portuguese speakers for example have a much wider range of vowels to work with and as a result tend to have fewer problems with English vowels as well.

Diphthongs are two vowels put together

Also notice that the diphthongs are normally grouped together on the chart as well.  So putting together an /ɪ/ with the unvoiced schwa sound /ə/ gives you /ɪə/ (think “ear” with a very British pronunciation).  As far as a building block approach this is a pretty clear and useful example for most learners I think.

The chart also organizes the consonants into pairs which are formed similarly, but where one is voiced (uses the vibration of the vocal cords) while the other is not.  You can most easily feel this by actually putting your hand on your throat and pronouncing these sounds (try pronouncing the airy /t/ and and its voiced cousin /d/ and you’ll see what I mean.

Once you understand this concept you’ll have a mucher better grasp of why we have three different pronunciation for the -ed endings of regular verbs. Voiced endings take the voiced /d/, unvoiced endings take the unvoiced /t/ and those ending in /t/ or /d/ add a syllable – all of this simply to lubricate speech and make things as easy as possible for the speaker.

It also explains why North Americans and some other native speakers like the Northern Irish pronounce the “t” in the middle of words like “butter” as a /d/.  Most British speakers end this word with the unvoiced schwa, so they need to use the unvoiced /t/ alongside it.  But I, as a North American speaker, want to pronounce that /r/ at the end and it’s voiced.  It’s simply much easier to keep the entire word voiced instead of turning the vocal cords on and off and on again.  It all makes perfect sense really.

Make a connection between listening and production

Much of the time when teaching pronunciation you will find yourself getting students to discriminate between different sounds or patterns that they hear. “Wait a minute,” you might say, “I thought this was about producing the sounds, not hearing them!”

Pronunciation is like a loop, moving from the ear, down to the mouth and back again. There is really little point in getting them to try to pronounce something that they can’t hear, so don’t worry if it all seems like awareness raising in the beginning. It’s part of a process that may take some time so be patient. And you’ll find that as much as they need to hear something in order to pronounce it, many times being able to pronounce it will actually help them to hear it later!

In a few weeks’ time will take a final look at pronunciation and focus on the top-down angle.