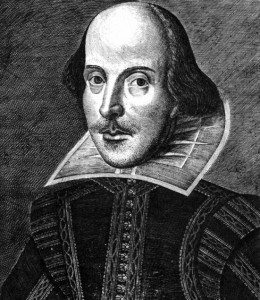 ‘To be or not to be’ – that’s the one line from Shakespeare that everybody knows. But the question is, do you know just how many other words, phrases and idioms he gave to the English language, either by coining them himself or by popularising them through his poetry and plays? This year marks 400 years since the Bard of Avon’s death, and yet even those who don’t know his work probably quote him on a daily basis. Today we’re looking at 20 words and phrases English owes to Shakespeare.

A foregone conclusion (Othello) – said when the outcome of a situation is clear from the beginning.

The truth will out (the Merchant of Venice) – meaning that the truth will eventually come out, no matter what you do to try to hide it.

Good riddance (Troilus and Cressida) – said when you are happy or relieved to be rid of something or someone.

I haven’t slept a wink (Cymbeline) – meaning not to have slept at all.

The be all and end all (Macbeth) – meaning the whole thing, the only alternative worth considering.

Eat me out of house and home (Henry IV Part 1) – to eat a lot of somebody’s food, especially when staying with the person whose food it is.

To wear your heart on your sleeve (Othello) – meaning to show your emotions, especially romantic feelings, openly.

(To wait with) bated breath (the Merchant of Venice) – to wait excitedly or nervously for something to happen, with your breath subdued (sometimes spelled ‘baited’).

There’s method in my madness (Hamlet) – meaning that beneath apparently chaotic behaviour there is some kind of order.

There’s the rub (Hamlet) – from the ‘to be or not to be’ soliloquy, this expression means the particular obstacle or problem that makes it impossible to do something (in Hamlet’s case, it’s the fear of what might come after death that prevents him from committing suicide).

The green-eyed monster (Othello) – meaning jealousy (jealousy and envy are associated with the colour green in English, as in ‘green with envy’).

Bedazzled (the Taming of the Shrew) – meaning greatly impressed by something or someone, as if they have blinded you with sunlight.

(To be) in stitches (Twelfth Night) – this is used to describe uncontrollable laughter,

The world’s your oyster (The Merry Wives of Windsor) – this means being able to do anything you want because you have the opportunity to do so, either through talent, looks, luck, power or money. 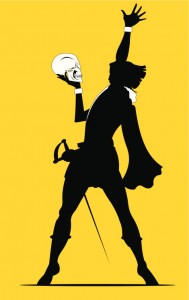 (To have a) spotless reputation (Richard II) – used to describe someone, especially someone in a position of power, who has never done anything blameworthy or morally wrong.

To make your hair stand on end (Hamlet) – used to describe something very scary.

So there you are, a handful of words and phrases English owes to Shakespeare – snippets of wit and poetry from the man who contributed more to the language, single-handedly, than any other writer. They’re all still in common use today, so why not try throwing one or two into your conversation? Or if you’re teaching English, why not bring a little of the Bard’s magic into the classroom with these resources? Enjoy!

Find out a curious fact about Shakespeare here.

5 thoughts on “20 words and phrases English owes to Shakespeare”