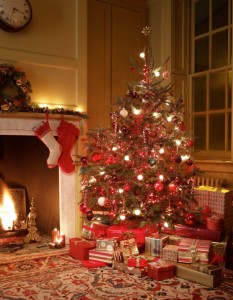 ‘Tis the season to be jolly, friends – think holly and mistletoe, presents beneath the tree, nativity plays, midnight mass and advent calendars.

With Christmas just around the corner and decorations already up and sparkling in town and cities across the globe, from London to Sydney, Baltimore to Banff, today we look at some of the most popular Christmas traditions in the English-speaking world.

In the days leading up to Christmas, it’s traditional for groups of singers – usually amateur choirs, but often just a group of friends – to go from house to house in the evening singing such well-loved carols as Silent Night, Once in Royal David’s City and We Wish You a Merry Christmas. If a group of carollers shows up at your door, be kind to them and hear them out; it’s often the case that they’re collecting money for charity as they go.

Many churches also have carol services, often on Christmas Eve and sometimes by candlelight. Open-air Carols by Candlelight celebrations, where people gather in parks or other public spaces to sing their favourite carols, is an Australian tradition that originated in the early 20th century and has since spread around the world.

One of the most popular Christmas songs is The Twelve Days of Christmas, which is fun to learn and sing with young learners in class.

During the festive season, theatres large and small throughout the UK, and to a lesser extent in other countries, put on pantomime shows. These plays, based loosely on classic children’s stories such as Jack and the Beanstalk and Cinderella, are intended primarily as entertainment for families with young children. They feature lots of singing, dancing, slapstick comedy and audience participation, plus a host of stock characters, such as the young male hero (always played a young woman) the Pantomime Dame, who is often the hero’s mother (typically played by a middle-aged man in drag), a villain, a pantomime animal (often a horse, donkey or cow), and a comic lead who gets audience to sing along and repeat traditional catchphrases such as “He’s behind you!” and “Oh, yes he is!” or “Oh, no he isn’t!”.

In the UK and in many current and former Commonwealth countries, such as Kenya or Jamaica, December 26th is a national holiday. Its unusual name derives from an old tradition whereby servants and tradespeople would receive a ‘Christmas Box’ – a gift of money or presents – on the first weekday after Christmas as a thank you for their services throughout the year. In the homes of the rich, the servants would have to wait on their masters on Christmas Day itself, which meant that they had to hold off until their work was done before they could celebrate themselves. These days, Boxing Day, like Black Friday in the USA, is primarily known as the day the post-Christmas sales begin.

Of course, no holiday is complete without traditional food and drink. Christmas Dinner, the main meal on Christmas Day (which is generally more important in the English-speaking world than Christmas Eve), is eaten at lunchtime and typically consists of roast turkey, Brussel sprouts, stuffing, roast potatoes, cranberry sauce, tiny sausages wrapped in bacon (known as pigs in blankets), and lashings of hot gravy.

For desert there are mince pies and Christmas cake, as well as Christmas pudding. Christmas pudding is rich and fruity, made with nuts, cherries and raisins. Traditionally a sixpence coin was hidden inside, which was said to bring good luck to whoever found it when the pudding was sliced. A popular yuletide drink is mulled wine, a deliciously comforting beverage made of red wine, sugar and spices, which is served hot with slices of fruit. Prior to serving, brandy butter or sauce is poured over it and set alight as the perfect garnish. 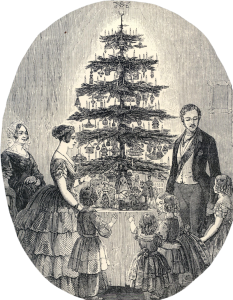 Queen Victoria and Prince Albert by their Christmas tree.

For many people, one of the most popular Christmas traditions is decorating the house. This includes dressing the famous fir tree, a tradition brought over from Germany in 1841 when Queen Victoria’s husband, Prince Albert, put one up in Windsor Castle. The Royal couple were illustrated in the newspapers standing next to their tree with their children, after which Christmas trees were all the rage.

Another beloved decoration is mistletoe, a plant that grows on apple trees, which is hung in the house over Christmas and under which a man was traditionally allowed to kiss a woman – bad luck was said to befall any woman who refused. One version of the tradition also has it that one berry had to be plucked for each kiss, and that the kissing had to stop when there were no more berries.

Don’t forget to sign up to our ELT Learning Journeys blog. You’ll find lots of great stuff to read here!