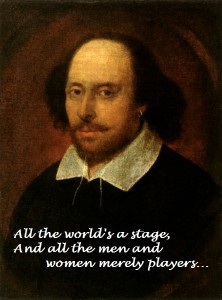 From puking babies to philosophical pigs, today we take a look at 5 poems for the English language classroom. Poems can be a great resource for both the teacher and the learner. Not only are they an ideal way to practise the stress and intonation patterns of the language, they also lend themselves to a whole range of accompanying activities, from predicting the content to discussing how they make the reader feel, or even, with younger learners, illustrating different scenes.

5 poems for the English language classroom:

With higher levels, you might want to introduce your learners to some lines by the most celebrated poet of all, William Shakespeare. Although his 400 year-old English can often be intimidating, especially as it was never written to be read on the page but rather heard in the theatre, there are still many accessible passages, even for English learners.

A great one to work on in class is the famous speech from As You Like It, All the World’s a Stage, in which Shakespeare likens life to a play and describes the ‘seven ages’ of man, all the way from the newborn baby ‘puking in the nurse’s arms’ to the ‘second childishness’ of the blind, toothless, forgetful old man approaching death. Before reading, you can ask your students to consider what they think the seven ages will be. After reading, you can discuss whether they still apply in the 21st century, or what the ‘seven ages of woman’ might consist of.

Sticking with the Bard, it has often struck people as odd that in his final will and testament, Shakespeare left his wife, Anne Hathaway, their ‘second best bed. Some have taken this as an indication that he probably didn’t love her all that much, but Scottish poet Carol Anne Duffy, who is currently Poet Laureate of the UK, has written a beautiful Sonnet about that second best bed that tells quite a different story. Before reading it, you might ask your students to consider why the Shakespeares had two beds in the first place, who got to sleep in (and inherit) the first, and how Anne might have felt when she read her husband’s will. Duffy’s answer is surprising.

Illustration to the poem Jabberwocky. First published in Carroll, Lewis. 1871. Through the Looking-Glass, and What Alice Found There.

Many of your students will know Alice in Wonderland, although fewer may know the name of its author. Lewis Carroll wrote a sequel to the original Alice novel, entitled Through the Looking Glass, and What Alice Found There, and in it he featured a brilliant poem about a terrifying monster called the Jabberwocky. The poem is a nonsense poem, with many made-up words such as ‘brillig’, ‘frabjous’ and ‘snicker-snack’. This might seem to make it a daunting prospect for students, and it’s probably best done only with very advanced classes, but learners will still be able to tell whether the made-up words are adjectives, nouns or verbs, and relying on their sense of English onomatopoeia, they can still have a go at saying what they think the words are describing – the great thing being that there’s no right answer, and that the poem somehow makes sense anyway.

Number 4 on our list of 5 poems for the English language classroom is an unusual autobiography. Simon Armitage’s Ten Pence Story tells the story, in chatty English, of a poor, ordinary British coin, starting from the mint and proceeding through life in the pockets of various individuals. There’s even a near-death experience on a ferry and the dream of one day being flipped to decide the kick-off at a football match in Wembley Stadium. The poem lends itself to pre-reading and post-reading activities, with students imagining as many experiences a coin might have as possible before going on, if they’re feeling creative, to come up with their own autobiographies of everyday objects. You can hear Simon reading it here:

Finally, a poem for kids by the author of such children’s classics as Charlie and the Chocolate Factory, James and the Giant Peach, and Matilda. Roald Dahl wrote many gruesomely funny poems and stories for children, in entertaining but accessible English, and some of your younger learners (as well as adult vegetarians) might enjoy this one, which tells the tale of a pig who eats his farmer. You can listen to it here:

Of course, you may well have your own favourite pieces of poetry that you’d like to use in class, but we hope that our list of 5 poems for the English classroom has given you some ideas of the various things you can do with them.  Don’t forget that song lyrics are another great resource for the ESL classroom. You can find lots of activities here for how to use lyrics in class.