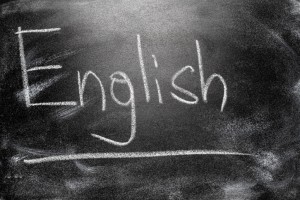 2. Among Facebook’s language settings, you can chose ‘English (Pirate)’, which turns your status update into ‘what be troublin’ you?’ your friends into ‘mateys’, your likes into ‘fancy this’ and your searches into ‘scour fer scallywags, ports and various sundries’. Landlubbers needing to find their way back to the shores of ordinary English have to go to ‘adjust ye riggins’ and click on ‘tongue’.

3. Despite the fact that ‘e’ is the most common letter in the language, novelist Ernest Vincent Wright once wrote a novel of 50,000 words – Gadsby – that did not include a single letter ‘e’ – a no doubt amazingly wondrous orthographical act but fully and thoroughly lacking a point. 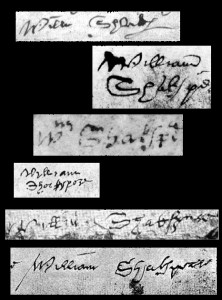 4. Shakespeare couldn’t spell his own name. Or at least, he never spelled it consistently. There are six surviving signatures by the Bard of Avon, and he spells his name differently each time: Willm Shakp, William Shaksper, Wm Shaksp, William Shakspere, Willm Shakspere and William Shakspeare. However, this is partly because it was common practice at the time to abbreviate names in signatures and partly because English spelling had yet to be standardised. A teacher of mine used to call him Old Billy Waggledagger instead. Can you work out why?

5. There’s a reason why we don’t eat pig and cow but we do eat pork and beef. It harks back to the Middle Ages, when Norman French was the language of the nobility in England and English itself the language of the peasantry. On the farm the animals were referred to by their Anglo-Saxon names, but by the time they reached the dining table they were being tasted and talked of in French.

6. English is, by international treaty, the official language of seafaring and aviation. All pilots on international flights must be able to understand and use English to a specified level, while Aviation English itself is highly regularised and codified to ensure efficient mutual communication and safety in the skies.

7. Even though ‘it’s raining cats and dogs’ is one of the best-known English idioms, very few people actually say it these days or even know where it comes from. The most commonly accepted explanation is that English homes in the past had thatched roofs, and domestic animals such as cats and dogs would often hide in them, only to be washed out of the thatch, or to flee it in search of better shelter, during times of torrential rain.

8. The so-called ‘Queen’s English’ is not the ‘standard’ variety of English in the United Kingdom. What people usually mean when they refer to ‘the Queen’s English’ is a variety known as Received Pronunciation (RP), which can very loosely be described as the standard English spoken in the south of England, especially the Home Counties around London. It is sometimes known as ‘BBC English’. The pronunciation the Queen uses for public address is actually extremely idiosyncratic (and very easily parodied). No one but the Queen speaks like the Queen – one simply doesn’t, one might say – and anyone trying to do so would sound ridiculously pretentious.

9. English has more pronouns than y’all learned in school. Unlike many languages, modern (but not Old or Middle) English lacks a distinct pronoun for the second person plural (at least as far as ‘standard’ English goes). ‘You’ is used to address both one person and more than one person (compare Spanish ‘tu’ and ‘vosotros’). This obvious gap has been filled in numerous creative ways by different groups of speakers. Most of you will be familiar with the US pronouns ‘you guys’ and ‘y’all’, while in the UK it’s not uncommon in certain regions (and within my own family) to hear ‘youse’ or even ‘you lot’. In some parts of the north of England, the otherwise obsolete familiar second person pronouns ‘thee’ and ‘thou’ are also still alive.

10. Perhaps not one of the most surprising facts about the English language, but one in four of the world’s population speaks it either fluently or to a useful level as a second language, with non-native speakers currently outnumbering native speakers by four to one. This reflects not only English’s status as a true world language, but the growing need for non-speakers to learn it in order to be able to operate in an increasingly globalised world.

11. A new dialect of English has been developing over recent years in London known as Multicultural London English (MLE), which is spoken mainly by young working class Londoners and which contains many elements of Caribbean, African and South Asian English, as well as traditional Cockney.

12. hippopotomonstrosesquipedaliophobia is a word in English meaning ‘fear of long words’. Although it’s obviously a term that has been coined for ironic effect, it’s based on the genuine medical term sesquipedalophobia. Neither term is helpful if you have to explain your condition at the doctor’s, especially not if ‘Supercalifragilisticexpialidocious’ is playing on the radio.

2 thoughts on “12 surprising facts about the English language”