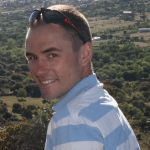 This week let’s get to know a person who has recently started working in our Teacher Training team for Spain and Portugal. His name is Michael Brand and he joined Pearson 3 weeks ago. Read on to find out more!

1. How long have you been teaching English?

I’ve been teaching English for six years and before that I was teaching French and German for two years. Most of my teaching has been in secondary school, though I have also taught primary school children.

Working with children is great fun because their enthusiasm is infectious and they are (almost) always laughing and joking. So the day-to-day of being a teacher is great, but it’s also nice to know you’ve helped them learn, something they sometimes recognise and thank you for. I recently got a nice comment from a former student: “With you we learned when we were asleep because of your intensity!” I liked that.

Sometimes when you’re teaching in schools there are really pointless meetings with people just telling anecdotes and getting things off their chest: these are a waste of time. This aspect of teaching has nothing to do with the pupils though!

I really like George Orwell and JRR Tolkein. I love 1984 and I’ve found Animal Farm very effective to use with students. Lord of The Rings might just be a little bit long to use in class though!

6. Which English-speaking place would you particularly recommend for a holiday?

The Lake District in the north of England is beautiful, but if it’s sun you’re after, then I probably wouldn’t recommend it!

7. And a particular dish or drink?

Contrary to stereotypes we do have good food in England, but perhaps you have to look a bit harder than in Spain! I love a Sunday Dinner, which is meat and vegetables in a sauce called gravy. A drink? A nice, warm pint of beer!

8. Who was your favourite English teacher?

My English teachers were good, but it was my French and German teachers who I thought were the best: they got me interested in learning languages. All of them were very really enthusiastic and energetic and a great example to follow.

9. Tell us an interesting website you would recommend to students of English.

The BBC website is great because it’s very varied and there’s something for everyone there: not just the news and sport, but features on travel, culture, food…and there’s a wide range of media too.

10. You’ve had to learn a foreign language yourself. What language learning tip would you give to people reading this?

Rome wasn’t built in a day. It takes time, so keep at it. When I moved to Spain I wrote down everything I learned on a post-it note. I kept telling people to repeat what they’d said while I copied, but they didn’t seem to mind. I stuck the post-its all over the kitchen. This really helped me. You just have to immerse yourself as much as you can: put your phone, computer, facebook etc in English, watch films in English, listen to English on the radio: get as much contact with the language as possible. If you can go to an English-speaking country, so much the better, but try not to make too many friends who speak your first language!